And you may ask yourself, how did I get here?

I am now undertaking the serious task of being a tourist in my own town. It helps that I've been away for a year.

Weirdest things so far
*Drinking fountains, with water you can drink out of
*You can drink the tap water 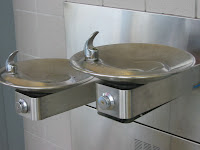 *Dollars are bills, not coins
*Free refills
*Cars that stay in their lanes
*Cars that stop for pedestrians
*Driving for the first time in a year
*Grocery stores
*Even small children speak English
*No one cares about football, of the soccer variety

Highlights
*Burrito with pork! and guacamole 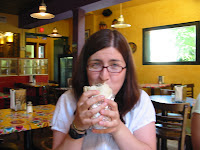 so what happens now?

Unlike a tall tale, in this story the moral goes first. The third time’s the charm. Double checking can get you into trouble. Always triple check!!!

Because when I looked at that piece of paper for the third time I saw that the arrival time in Munich was 9:30, and that my flight was actually departing in five minutes. Not thinking, I ran to the check in desk to ask what I could do. Unfortunately, planes are not trains that you can hop onto one minute before they depart (and I have done that). And because my ticket was a frequent flyer ticket, using three different airlines to get home this was not going to be easy. That and the fact that I had not slept and had not eaten anything in a long time. After Turkish Airlines was very unhelpful I burst into tears, called mom and William, and then pulled myself together. The Lufthansa people were even more unhelpful than Turkish Airlines, refusing even to open my itinerary on the computer.

And so I found a pay phone, and for the first time used that pay phone card I had bought so very long ago. After calling Ian, I spent a long time on the phone with USAirways. Yes they could get me home eventually, but I would have to pay a change fee, and they would also have to redo my flights to Scotland. What stupidness! I was cancelling, but then they couldn’t rebook me on the same flights. And so now I fly into and out of DC.

Luckily, Liz is still with her family in Manassas, and she is going to pick me up at the airport. Unluckily, I had to pay another $130, and I was going to need to be at the airport the next morning at 4:30. As William said, I guess I really wasn’t ready to leave the airport. After making my plans I went in search of food. On the down side I couldn’t get anything to eat for an hour. On the bright side the place had free wireless internet.

I decided that I was staying in the airport, because it would have been too hard to get back the next morning, and wrote something to that extent on facebook. And so later a worried Collette called me, and I reassured her I was fine, although feeling more stupid than I thought possible.

Around 5, my friend Katie called me. She had also been on facebook. I live right next to the airport she said, and I have the car today, I can come get you. Bored and exhausted, I said yes, and by 6 I was in a place with a bed, a TV, a friend, a cat, and real food. We talked, watched phantom of the opera, had soup and dolma, and I slept. Sitting now in the Munich airport, I have many many miles to go. And likely won’t even be home tonight, as the drive from DC takes 4 or 5 hours. But I do feel like I am ready to go home now, and incredibly lucky to have been taken in for the night. And, after my friend Amy called me worried last night, I have to say that facebook is incredibly pervasive, and well, it can have a positive effect once in a while.

But always triple check!!!
Posted by Katie at 12:26 AM No comments:

A moment of unbelievable stupidness

I’m not sure where to start, where the craziness of the last day began. I think I could put it down to the fact I was sick for the entire month of May. The upside – I learned the word for tonsil. Perhaps because I got too tied up doing both the set and the lights for a production of Joseph and the Amazing Technicolor Dreamcoat. And then after that was over got food poisoning. All three of them resulted in me not seeing anyone for over a month, including my mom and William who got there in the middle of all the craziness.

And so the two weeks of June before I was to leave were absolutely crazy. I tried to see everyone, and mostly succeeded. I spent the weekend in Saray at my friend Huma’s family’s summer house, near the black sea in the European bit of Turkey. We fit 14 of us into the house, grilled a lot of chicken, some of which was a bit too pink to be eaten, went swimming, watched as the neighbor’s house caught on fire and people frantically ran around waiting for the fire department to come, and generally had a fantastic time breathing village air and doing nothing.

When I got back on Monday my couchsurfing friend Tom started staying with me. He stayed with me the first time on his way to Iran to hang out and learn Persian, and now they had told him he could no longer renew his original visa, so he would have to leave the country to get a new one. Told the easiest place to get a visa was Istanbul, he took a 48 hour bus, only to find out it was going to take much longer than he thought. And so he was staying with me again. My friend Cat was about to leave for the states, and so the three of us spent most of three days together, walking, attempting to not die while biking on the islands, and eating/drinking.

My German roommates left Thursday night for two weeks on the black sea coast. I had to say goodbye to Cat on Thursday as well, and then Tom took the train to Bulgaria Thursday night. I had very little time to feel lonely however, as Friday I went with mom, William and the students along the golden horn to Eyup, and was then taken out to a wonderful dinner. I’ll spare you the details. And somewhere in there I finished the school year, playing lots of Taboo, Jeopardy, and giving away American candy to most of my kids, who thought that was the greatest thing ever.

Saturday was frantic shopping at the bazaar, saying goodbye until September to friends there, trying to spend as much time with mom and William, and having another wonderful dinner, this time in Tunel. I feel like I am making up for all the parents weekends I never really had in University since I was living in the same town as my family.

Mom and William left early Sunday morning, and I went to the Moda Cay Bahcesi with my roommates to eat borek, drink tea, and watch the view, which, this morning, included dolphins. In good brunch form we stayed two and a half hours, and then I ran off to return my Joseph CD to Eric, the fellow Asian side person of my show, who gave me rides, advice, and lots of help, and then to Taksim to see Joanna, who was in the US, married her Turkish fiancée, and then, a week into their honey moon, decided that they should not move back to Turkey, but should stay in the US. And so she was back to get the cat. Although she did mention that if McCain were to win, they might give up on the green card for the moment and move back to Turkey. At 6 I was back on my way to the Asian side.

I got to the house to find that Ulas and Orcun had gone off to find our kittens. Half an hour later they came back with one of them, saying that next weekend they would get the other. I guess that kittens hadn’t wanted to be caught, and had been running away. The one they brought was orange and white, terrified, adorable, and a very good diversion from beginning to pack. Already feeling like I didn’t want to leave Istanbul, this just made it harder.

And then it was time for football in Bostanci at 9:45. Turkey was playing the Czech Republic, and they were tied in the group. The winner of this game got to advance, and if the game was a tie, it would go to a shoot out. Tension was high, and people got increasingly frustrated as the Czech goal keeper, who we dubbed bumblebee, kept saving all of the attempts that Turkey kicked his way. Sixty minutes in and the score was 0-2 Czech Republic. And then Turkey scored, and again, and again. And then the goalkeeper got red carded for hitting a guy in the head, and one of the regular players had to become the goalie, because all substitutions were used up. But there was not enough time left for the Czech Republic to take advantage of the situation, and Turkey won. And I won – I had predicted the score to be 3-2, and won an Efes Pilsen, Turkish team shirt. After the first three games, everyone I was with had a t-shirt, and the guys at the bar just loved all these foreign women who were so into football, that they took photos with us.

Traffic was absolutely insane, people hanging out of cars, sitting on cars, standing on cars, running down the street, and all of them were waving Turkish flags, even the covered woman who broke off a tree branch to make a pole for her flag. So it was that returning at 1, playing with the kitten until 2, I began to pack at 2. That and wait for my laundry to finish drying. I was not just packing my things for the summer, but packing up everything else in my room to leave in a corner, as someone else will be living in my room for the summer.

On double checking my ticket a few days ago, I realized that my flight was not at 7, but at 9:30, and so was able to take public transport to the airport. I left at 6, got a taksi to the iskele, took the fast sea bus across the Sea of Marmara, and then the airport bus from there. After going through security, I opened my itinerary for that third look and took off running.
Posted by Katie at 12:24 AM No comments: