I am happy to report that I have survived my first ever earthquake. It occured at 20:53:32 on Wednesday, March 12 while I was in a cafe eating soup with Ingo and was 4.8 on the richter scale. I didn't feel a thing. I actually had no idea until a teacher asked me about it at school the next day. Anyways, Istanbul is located on the North Anatolian fault, which is similar to the San Andreas fault in California. I any future earthquake exeriences are like this one. 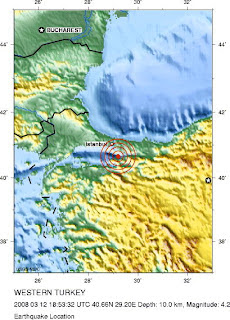 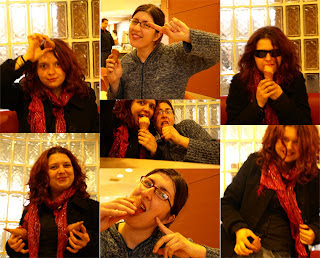 My plumbing nightmare started on Thursday night, and at the moment my house is without a working toilet. Unfortunatly, during this period Ingo had two guests visiting and I had one. My guest was an absolutely wonderful girl named Charlie, another couch surfer. From the moment I met her at the boat on Wednesday and she appoligized for being late because she had gone the wrong direction on the tram, I knew I liked her. 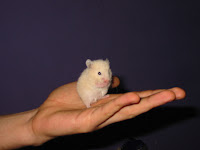 After managing to get her stuff up my hill and my stairs, we went to Beşiktaş, to visit Filip, Marten, their hosts, and their newly aquired hamsters, in what is possibly the messiest flat I have ever been to. But since it is filled with good people, I can let that slide. Omer was once again making frying fish. He does a good job, but it seems to be the only thing that he can cook. It was a rather crazy night. 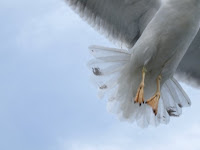 The next day we went to visit Heylibeada. Filip and Marten were planning to leave for Ankara, but Marten came down with the flu, and so Charlie, Filip and I went to the islands with a backpack full of picnic food. The boat to the islands is about an hour, and Charlie, who has a tendency toward sea sickness got a little green. I fed the seagulls, and Filip and Charlie tried to photograph them. Sea gulls seem to be very difficult to photograph though. 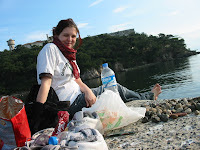 Once at the island we took the road straight up the hill, stoping to swing on the swings. We found a really cool ruined chapel thing, that had a skull and cross bones on it, as well as other more pagan looking carvings and greek letters and continued on up the hill. We stopped at what the sign said was a sanatorium but now was full of guys, likely fire fighters, playing volleyball. 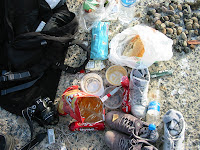 A guy came out and talked to me but I really had no idea of what he was saying at all. We went down the hill to what looked like a beach, but was really dirt, and after making friends with the dog sat out on the pier for the best picnic ever!! After the picnic I laid on the pier and had fun taking sideways and upside down photos while Filip went wading and exploring. 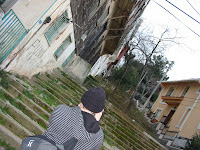 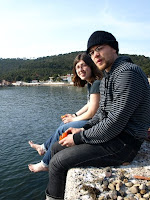 Unfortunatly, one cannot sit on a pier in the sun forever, and so we continued on around the island, seeing the water deliver carrage and some fantastic views. 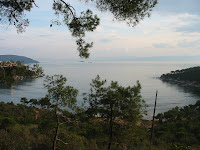 It wasn't so long a walk, and about an hour later we were back at the iskele. We pondered staying longer, but as there was a boat leaving in 20 minutes, decided to go back to Kadikoy. Charlie discovered that sitting on the side was better for avoiding sea sickness, and it was too dark to photograph sea gulls. In Kadıköy, Filip headed to the train station to buy his tickets to Van, and Charlie and I went home. 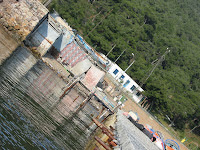 We looked at facebook photos, and she cooked me an excellent dinner. Except when I went to wash the dishes, the water went through the sink and onto the floor. Time to call the plumber, especially since the faucet for the shower was beyond the point of just dripping - it was a steady flow.

The next morning Orçun called me about 10 to tell me the plumber would be there in 20 minutes. He looked at everything, sent his assistant running out for materials, and fixed the kitchen sink. While he was working, our neighbor from the first floor came up and started yelling at him. I didn't understand and thought the problem was that he had shut off the water. He yelled back and said it wasn't his fault and she went away, only to return a bit later to yell some more. At this point Charlie was up and a bit intimidated by yelling neighbors.

But the sink was working so I did a mountain of dishes and then Charlie took a shower. While she was in the shower we had three women come in five minutes to tell us not to use the water. And so we stopped using the water. Then, as we were leaving to go to the market and school, a woman asked us to dump a bucket of water on the floor and in the toilet in 5 minutes so I went up all the stairs to tell Ingo, only to be told that it was no longer necessary when I got down the stairs again. This time I called ingo.

The market was fabulous as usually, and the sixth graders were on better behaviour as usual, and I was so happy I bought some flowers from the roma women at the iskele on my way home. To arrive and be asked to once again pour water down the toilet. After one bucket, the woman decided that it would be better if she did it. Later another man came to look and told us we needed to talk to our unetici.

Still not able to use the water, Charlie and I left to aviod any more problems. We went to Taksim, and I told Orçun about yelling neighbors and water problems and how I was at the limit of my Turkish - could he please find out what was going on. It was our six month aniversaries - mine of being in Istanbul, and Charlie's of leaving home, and so we had a date and then met some couchsurfers for beer.

Turns out the water pipe that runs through the building had somehow broken while the plumber was fixing our sink. 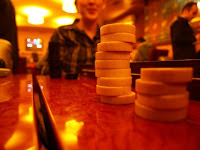 Fortunatly, they decided it was old and would have happened anyways, and so we did not have to pay for the repairs. But no water for Saturday. Filip left Saturday morning, and Charlie and I went to Ortaköy to look at the crafts market, and eat Kumpir (the best baked potato ever, filled with stuff), and a waffle, 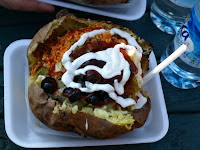 also filled with fruit and chocolaty goodness. Instead of going out that night we decided to stay home and watch When Harry Met Sally, giving inspiration for the title.

Sunday morning at around 10, four guys stormed into the flat, set the toilet in the hall, and pulled out the biggest drill I have ever seen, with a drill bit to match and started making a huge amount of noise in my flat. It wasn't until they had moved downstairs that I could see what they had done. The tile was ripped up, and there was a hole down into the flat below. 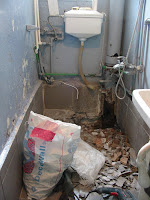 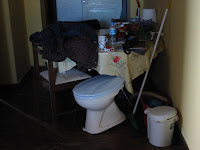 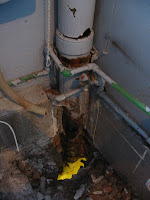 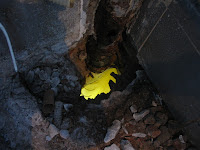 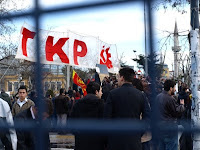 After not showering for too many days, Charlie and I decided to get over our modesty and visit the hamam in Üsküdar. We had not counted, however, on the anti-AKP protest that was being held by the Turkish Communist Party. There were tons of police, and no busses, dolmuşes, or mini busses, making it very difficult to get anywhere. Stinky, and dissapointed, we decided instead to photograph the protest. I was a bit nervous at first, but there were no problems.

After that we walked up the sea side, had a cup of tea at the Moda çay bahçesi, I learned some Welsh, and then we went to Ali Usta - the best ice cream place in Istanbul. And because of When Harry Met Sally, and the fact that we were substituting with ice cream, we decided to document our orgasmic ice cream experience. The place was pretty empty at the beginning, but by the end we were getting some funny looks. It will remain one of my favorite memories ever I think.

We went back to the flat so Ingo could leave (someone had to be there to let in the plumbers), Charlie packed up, and I walked her to the bus office. It was really sad to see her drive off, but I am sure that our paths will cross again.

As the toilet was still in the hall, I spent that night with Hande, who is frantically working on grad school applications. Which brings us to the time I started this entry.

I am happy to report that Charlie has gotten safely to Greece, Filip to Iran, and that as of Tuesday night we have a working toilet, and can use our water again.
Posted by Katie at 2:05 PM 4 comments: 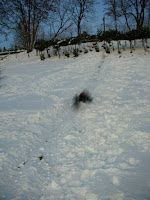 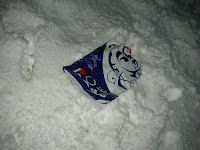 I'm finding it a bit difficult to get my head around, but two weeks ago today (Tuesday), we were in our second day of a snow holiday. By tuesday the roads were all slushy, but on Monday Orçun and I went sledding on the hill next to the moda tea gardens. We were sledding on syrian plastic bags, looking out at the sunset, hayasofia and the blue mosque. Sledding really doesn't get any better. 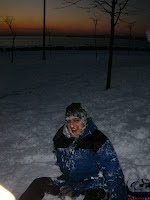 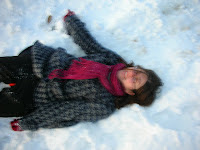 A week later I was sitting in the tea garden, right above my sledding hill with Filip and Marten, drinking tea and watching the sunset, with not even a hint that it had ever snowed. 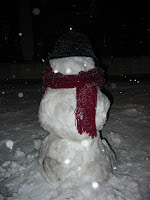 The snow started on Saturday, and when I got back from beer in Bostanci about midnight it had started to accumulate. Not wanting to risk the snow being gone in the morning, I made a snowman at midnight. Sadly, when I went outside to get my camera and went back out the head had been destroyed and I had to make a new one. Yay for snowmen!! 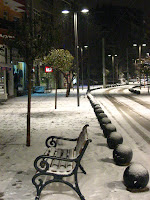 After making my snowman I was not at all feeling like going to sleep and so I wandered around Kadikoy. Near the fish market I ran into a couple who said hi to me in English. They told me I looked so delighted by the snow that it was obvious that I was not Turkish. 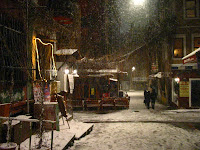 We almost went sledding right there and then, but were missing something to sit on. 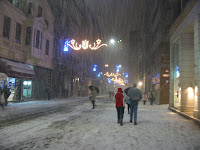 Sunday I met Char, a UNC student beginning her time abroad at Boğaziçi, and experienced Istiklal Cadesi in the snow. It was falling so fast that within minutes my coat was white. The roads were covered (making the bus ride back a bit worrysome) and causing school to be closed Monday. Bringing me back to the begining of this out of order blog entry. 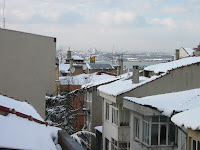 A snowy view
Posted by Katie at 1:56 PM No comments: